In falling film evaporators, the liquid product usually enters the evaporator at the head of the evaporator.  The liquid enters the heating tube and forms a thin film on the tube wall where it flows downwards at boiling temperature and is partially evaporated.

In general evaporation takes place inside vertical tubes.   There are also applications where the process fluid evaporates on the outside of horizontal or vertical tubes.  In all cases, the process fluid to be evaporated flows downwards by gravity as a continuous film.  The fluid will create a film along the tube walls, progressing downwards (falling) – hence the name.

The fluid distributor has to be designed carefully in order to maintain an even liquid distribution.  This distributing applies to  all tubes along which the solution falls.  The distributors are usually called ferrules due to their concentric shape.  In the majority of applications the heating medium is placed on the outside of the tubes.  High heat transfer coefficients are required in order to achieve equally balanced heat transfer resistances.  Therefore, condensing steam is commonly used as a heating medium.

For internally evaporating fluids, separation between the liquid phase (the solution) and the gaseous phase takes place inside the tubes.  In order to maintain conservation of mass as this process proceeds, the downward vapor velocity increases.  As a result it will increase the shear force acting on the liquid film and therefore also the velocity of the solution.  The result can be a high film velocity of a progressively thinner film resulting in increasingly turbulent flow.  The combination of these effects allows very high heat transfer coefficients.

Evaporation takes place at very low mean temperature differences between heating medium and process stream.  As a result, these devices are ideal for heat recovery in multi stage processes.  A further advantage of the falling film evaporator is the very short residence time of the liquid and the absence of superheating of the same.  Not considering the vapor separator, the residence time inside the tubes is measured in seconds, making it ideal for heat-sensitive products such as milk, fruit juice, pharmaceuticals, and many others.

Be the first to review “Falling Film Evaporators” Cancel reply 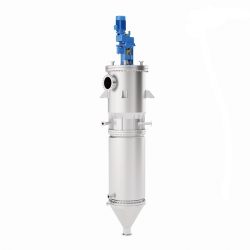