The separation process in a decanter centrifuge relies on a few process characteristics such as centrifugal force or G-force, sedimentation rate and separating factor, differential speed between the conveyor and bowl, and clarity of the liquid discharge.

Decanter centrifuges require a centrifugal force for the separation of the solids from the liquid.  This characteristic is dependent on the radius of the centrifuge and its angular rotational speed.  A decanter centrifuge applies a force equivalent to several thousand G’s, which reduces the settling time of the particles.  It is also favored to maintain a large G-force, which will result in an improved separation. 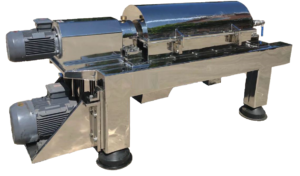 How does it work

3-phase separation with a decanter

With a 3 phase decanter centrifuge, it is possible to separate 3 phases from each other in one process step only.  For example, two liquids which cannot be mixed because of different densities (e.g. oil and water) are separated from a solids phase.  The heavy liquid (water) collects in the middle between the oil and the solids layer.  Thus the two liquids separated from each other can be drawn off from the decanter.  The solids are transported via the scroll to the discharge openings as it happens also in 2-phase separation.

Parameters and influencing factors of the separation

Through the feed, the separation medium to be processed can be input into the center of the infeed chamber of the scroll, where it is accelerated.  The throughput will have an influence on the residence time.

The separation medium reaches its maximum speed in the decanter bowl, causing the solids to settle on the bowl inner diameter.  A characteristic feature of the bowl is its cylindrical/conical shape.

The clarified liquid flows to the cylindrical end of the bowl in the decanter centrifuge, from where it runs out through openings in the bowl cover.  These openings contain precisely adjustable weir discs/weir plates by means of which the pond depth in the bowl can be set.  The weir discs determine the filling volume of the bowl.

Advantages and limitations over competitive processes

Generally the decanter centrifuge has more advantages than disadvantages; however, there are some limitations when compared to other processes.

Be the first to review “Decanter Centrifuges” Cancel reply 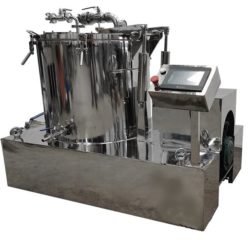